Learn about Jeni's adventure and how new opportunities are opening up across the country.

"I came along to Creation Station for the first time at Easter with my boys, brought along by a friend. I LOVED it. My boys were a little (ok a LOT) more unsure but I knew that as it was very much like the messy art we did at home that it wouldn't be long before they loved it too. I mentioned to Aby very briefly that if she ever had any job opportunities come up that I'd LOVE to get involved - and who would have thought that by the end of that summer term I'd be running six Creation Station sessions per week by myself?!

It's been a brilliantly mad journey with quite a few chuckles because people think I'm Aby or Aby's sister - apparently we look quite similar! It all went so quickly from the beginning sitting in and observing a morning's sessions through to getting involved as an assistant, to only a few weeks' later suddenly having to run four sessions solo when Aby was struck down with the 'flu - even as dosed up on painkillers as she was we were both giggling with excitement as I gathered together my very own kit for that week! 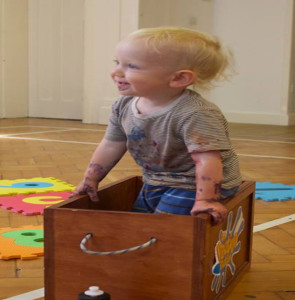 Since then I've been thrown in at the deep end running all six sessions per week on my own as Aby's back has been playing up pretty badly, and to be honest the way it's worked has been perfect for me as it's not given me any chance at all to get scared or worried that I might not be able to do this on my own. The classes have been wonderful though. The parents, grandparents and carers have all been so lovely to me, friendly and welcoming, and always asking after Aby of course! It's been lovely getting to know the adults a bit more too, watching barriers come down, and seeing them grow along their own journey through parenting.

I've recently started bringing my own boys along with me to the Thursday classes. Now we've survived two weeks, and I think for us it's working pretty well. My husband gets a brief break from childcare, and my kids (they're 20 months and 4 3/4 years) get a chance to enjoy the fun too: since working for the Creation Station our home art sessions have noticeably diminished, and when I took on leading the Thursday group the boys weren't able to come at all to begin with so it's great that they're now able to come along with me! We just about squeeze everything into the car along with the boys, and they're enjoying the freedom of being able to join in as and when they want to. 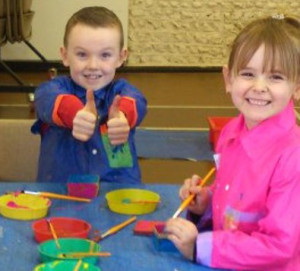 Jeni gets the thumbs up from the children!

It's been amazing watching these kids grow, even over just the past term - language and vocabulary leaps, and babies starting to toddle by themselves! Watching confidence growing in the shy ones, and engaging and channelling the energy of some of the boisterous ones - and seeing my own children grow as well. Bean, who I don't often see in "preschool" mode, chatting away to anybody at all, and Bear slowly engaging more and more in group activities, making friends and running riot! I love that my boys are such a great advert for what Creation Station is about, engaging imagination and creativity, exploring and discovering.

Almost a year and a half ago I set up my own online profile as "the messy mama" with the aim of eventually running messy art workshops for children and parents; so to become a part of The Creation Station and to be able to deliver sessions like this has been amazing. Thank you!!

With each season comes change though and so we are about to head off on another new adventure, with my husband taking a new job up in Yorkshire we're setting off this autumn from Worthing and leaving the Creation Station family - albeit temporarily I hope: once we're settled down in a new place to live, I'm sure you'll be seeing more from me!"

Follow this link to find out more about the sessions and parties in Worthing and surrounding areas.

Interested is developing your own successful business? Find out more with a free information pack.

Another amazing session with Mandy

Another amazing session with Mandy. Thank you so so much. Glad to be back! xx

Baby enjoyed himself, was a lovely class

My grandson loves everything to do with…

My grandson loves everything to do with Creation Station . Charlotte is so well organised and friendly .

Had a lovely session this morning

Had a lovely session this morning. Perfect for mummy daughter time. The leaders were very friendly and organised everything so well. My daughter loved it too!

We love our classes with Charlotte

We love our classes with Charlotte, she is always so smiley, welcoming & enthusiastic. The crafts are always amazing & we love to take them home. She was an angel throughout lockdown & we looked forward to our weekly delivery of crafts.

We love creation station, the girls love getting their delivery to the door. Catherine has supplied us with lots of crafts through lockdown. The girls and myself are looking forward to making the Christmas cards.

Very enjoyable and loved it

Very enjoyable and loved it

Alix at Creation Station provided a…

Alix at Creation Station provided a wonderful party for our daughter's 7th birthday. Despite the Covid-19 restrictions, which she navigated firmly but without them ever feeling like they dominated the party, the children had the most wonderful time. As a parent, it was a real relief to be able to step back and let someone so experienced, so warm and so friendly, take the children through their activities. Our little girl said it was 'everything she wished for' - you can't ask for more than that!

Great family activity . So well organised and thought out. My 5 and 2.5 year olds really enjoyed it . The theme was lovely, Autumn so could be very creative . The venue suited the class and all the COVID guidelines were followed . Would recommend

Discover the top 3 reasons why people rave about finding their perfect creative opportunity.