The Creation Station Bath: Finger Dough Disco Gym... or something! 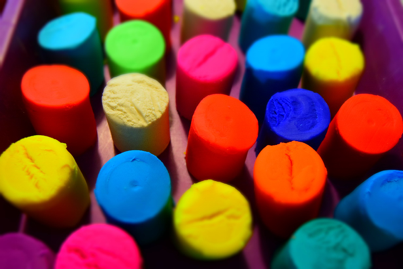 Getting out the craft box, dipping the paintbrush, cutting and sticking, and okay, getting a little messy is lots of fun!  Especially when you are young (or young at heart)!  But even when you work in this area, it is still easy to lose track of the myriad of benefits that creative play brings.....especially when you are re-living your childhood with a pot of PVA!

We are currently focusing on different textures in our baby and pre-school classes, and this week’s theme was ‘Squishy and Squashy’. Among other exciting activities we got to have some explorer time with one of our favourite materials -  ‘PlayDoh’.  As we were encouraging our class members to squash and squeeze our blobs of Playdoh and (much to our grown ups’ disgust 😉!) mix the colours, I realised that it probably wasn't very obvious what benefits this was bringing.

Did you know that most childhood hobbies and distractions are secretly adding to your little one's portfolio of skills.  In fact, developing and improving gross and fine motor control is at the root of many common and popular, pre-school games, toys and activities.  Now, if you, like me,  began to lose the ability to recall scientific terms in about 1998, this definition has proved very useful to me;

This week’s class focus on squashing and squeezing was a great activity for improving muscle strength in fingers, hands and wrists which is vital for the time when the children start forming letters and writing at school.

In fact these days, Early Years Practitioners frequently incorporate such activities into the daily schedule in reception year or intervention groups through Dough Disco/Finger Gym/Funky Fingers/Dough Gym in order to improve mark making or writing or to ready the children for those tasks.  There are also theories being examined about a link between children who struggle to attain expected levels in literacy and under-developed gross and fine motor skills.

But what is Dough Disco?  Dough Disco is a fun, dance-like activity where the children squeeze, squash, mould, shape and poke dough in time to the music.  The music, dance-like aspects encourages rhythm and gross motor control, whilst the dough element promotes the muscle strength and fine motor control.  You can watch a (rather exuberant!) version here!

If you haven't have enough caffeine yet and Ronette in the video about is a little too much for you, have a read through this article below.  It is from the rather amazing Early Years expert Alistair Bryce-Clegg (ABC) who also claims to have devised the concept of the Dough Gym

Of course, many of you will have little ones who may not be quite at this level yet, just like many of our class members.  Are these activities still relevant?

Yes, yes, yes!!  Does squashing, squeezing, pressing and poking Play-Doh only help with future writing?  Of course not!  Strengthening those muscles, and improving those motor skills will help with other tasks - with making the most of our toys, with feeding ourselves with some degree of accuracy (okay....there may still be some messy faces for a while yet!) and with picking up the tiny bits of fluff under the sofa when the in-laws are around.  But yes, they will eventually help with writing that treasured, first handwritten birthday card too.

Others of you, like me, will have older children who are already in the midst of what I like to call "cursive writing hell" - (Previously my DD1 had beautifully formed and legible writing, but apparently this isn't good enough and we now have to ensure all children are able to join up writing into an illegible, spider-like scrawl - Grrrrrrrrr!)

We have recently discovered that DD1 (aged 8) has some difficulty in coordinating both sides of her body.  She struggles with actions where she has to cross the 'midline' - the imaginary line down the centre of your body, actions involving changes of direction around the midline and also actions where the hands have to do two different movements (eg, using a knife and fork,  tying laces etc)

Whilst researching this article and looking into the benefits of our class focus, it came to me that dough disco might be a great way for DD1 to improve on these weaknesses.....especially as she LOVES music and dancing.  So, we set about following a couple of Dough Disco routines.... 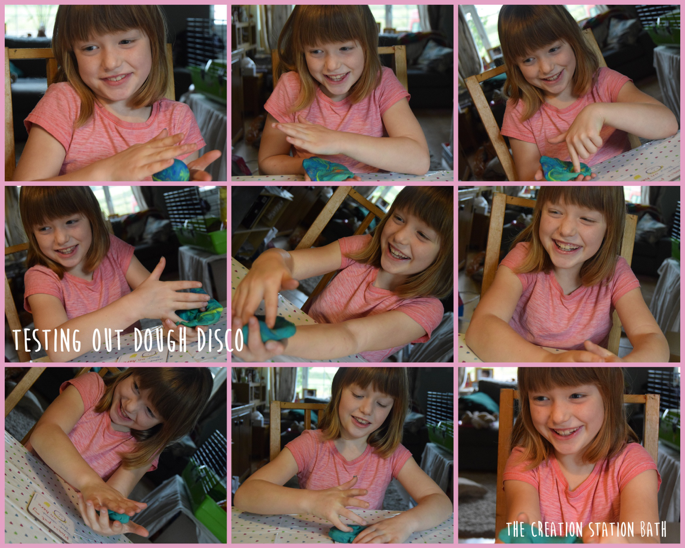 As you can see, DD1 thoroughly enjoyed the experience!  There were definitely some movements that were trickier for her to complete due to her weakness, so more practise and increased strength can only contribute to improving her dexterity.  I can definitely see the benefit of adding some dough gym to her existing exercises.

DD2 (aged 5) was a little bewildered with the whole process and found the routine a bit tricky to follow!  However, I know from speaking to EYFS teachers that dough disco is best followed on a daily basis and I am sure that over time, the children get used to the actions and routine.  It did however, instigate a Play-Doh 'Bake off' play session for both of the girls, in which they were engrossed for over an hour!  Win, win!

One unexpected result, however, was the effect on my primary school teacher husband.  Even though he teaches year 3, he could still see the benefits of doing this and has placed a order of a pot of Play-Doh for each of his pupils.  Whether it will have any effect on his reluctant writers remains to be seen, but at the very least, it would be a great 'warm up' before a big literacy session!

So......in conclusion, my simple 'Squishy, Squashy' theme for this week's Creation Station classes has led to lots of additional learning and knowledge - for me, my class members and my family!  Maybe, even my husband's primary school pupils too!  Wow!

Art, craft and creative play are too often lumped together into 'messy play', viewed with disdain and disinterest, but in the words of one of my previous blogs 'It's not just messy play, you know....'

Let me know if you have a go at Dough Disco or have any experience of its sustained use.....

Absolutely love these classes. I was first introduced to these from another baby group leader, I wanted to take my little boy to some different groups. When we were allowed to go, we went to the baby groups in Westhoughton. It was a very warm welcome that made us feel so comfortable in a new group. Everything was explained fully on what we had to do in the groups, even providing protective clothing for the clothes for my little boy. After this, I have gotten to know the group leader a little and now started to join in monthly arts and crafts zoom meetings with other ladies who enjoy this. I never thought I would start a hobby doing this but I LOVE IT! I’ve now made 2 things and am waiting for the March class to make more. It’s something to take my mind away for a few hours and do some creating. I was always so interested in arts and crafts when I was young but now this has got my mind buzzing. Thank you for your groups and lovely leaders! It’s been brilliant doing these groups in lockdown!

My daughter took part in the Slime workshop and really enjoyed it, would definitely recommend!

Excellent value and a variety of activity sheets

We held a joint online arty party for my 6 year old daughter and her friend today and it was brilliant. Nicola Gillaspy was really helpful in organising the event and sent out everything we needed ahead of time, and was an absolutely brilliant party host. All the girls were engaged and made some lovely crafts, and it was lovely to see them all laughing and having fun together, in spite of the lockdown. Thanks Nicola - highly recommend her parties ☺️

I cannot praise the creation station enough. It has been a wonderful experience taking part in the zoom calls and it has been a god send to my sister, who has learning difficulties. I wish I had found you sooner

My kids love The Creation Station…

My kids love The Creation Station classes. They are always well run and really engaging. This session was on zoom and the joining info was really helpful and meant the session ran really smoothly. Would definitely recommend.

Really enjoyed our session with the…

Really enjoyed our session with the Creation Station. Thanks!

My 9 year old twin girls absolutely love their Creation Station sessions with Alexis. They always want to do the normal after school sessions, and are equally enjoying the zoom after school sessions plus some extra holiday sessions too. Alexis is great with the children, and the crafts are fun and varied.

Superb 2 hour session. My 8 year old daughter had so much fun. Avne was amazing at keeping all the children engaged. Thankyou.

My 6 year old loved the online Wizard Workshop! You can tell Alix was a teacher as she has the ability to hold all the kids attention. They had great fun with the slime making and other crafts. It was very exciting to receive the box in advance and I think for 2.5 hours it was also great value for money.

It's not what you do but how you do it.