Find out how Kevin became part of The Creation Station.......

In the last 5 years I have made 2 significant changes in my life:

2.    Becoming a Daddy to our most wonderful daughter. 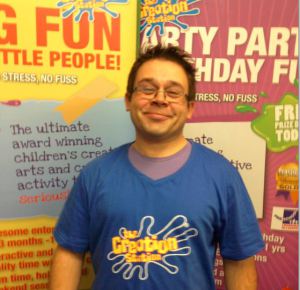 On the 19th of July 2008 I got married to my beautiful wife and I knew that whatever faced us in life, we would get around it as a couple. Sadly I have had a few jobs which were hit by the recession meaning I faced redundancy a couple of times and spent months looking for work with little inspiration from what was available.

It was in light of these changes that I made the decision not to accept a work life that provided an income but no real enjoyment.

I felt that setting up something of my own would have been a struggle and so I looked at investing in a franchise. I did a bit of research, however, there was nothing with a major, 'yes I could see myself doing that' appeal.  It would also have to be something that all my family would be happy with, as support from my family was vital.

"I made the decision not to accept a work life that provided an income but no real enjoyment."

In October 2012, myself and my wife went to the NEC for the National Franchise Exhibition, to get a few ideas and to see if anything grabbed my fancy. We came across one woman speaking about her experience as a Creation Station franchisee and instantly grabbed my attention (Thank you, Cathy from Preston!). She was telling her story of what she used to do and what she is doing now and it sounded brilliant fun. It also fitted in nicely to my family commitments, as it was a term time franchise and I could therefore have more quality time with my wife and daughter during the holidays (instead of having a statutory 4 weeks).

We found the Creation Station stand and spoke to Cathy, she advised us to have a good look at the website, and if we felt that it was right for us then to get in touch and take it from there. Me and my wife liked the idea (and my wife said to me 'I can picture you doing this!'). We attended the Discovery Morning in early December with my daughter and my parents and within five minutes of seeing a practical session, I knew that this was what I wanted to do, and more importantly what I could see myself doing. I also had the backing of my family who also thought that it was something that I could do.  I was phoned two days later to be told that I had been approved by The Creation Station and that they were interested in working with me. 'Yes, I want to do it' was my instant reaction!

The following three weeks were a rollercoaster ride. Could I do this? The franchise I'm interested in is an environment which is perceived as a woman only environment'. I wasn't worried about working with a team of women, I was worried about working in front of women. How would they perceive me, a man running a mothers and toddlers group? Would they think differently knowing that I am a man running it?

The majority of January (up until my training) I felt much the same, but I was also looking forward to my new venture. I was nervous about the training, however, it was brilliant and a lot more relaxed than I expected it to be. There was a lot of great tips and ideas too and knew that I would have fantastic support from head office if I had any questions. As I walked out the building to make my way home, Sarah said a few inspiring words to me and I started to bubble up. My emotions and everything I had been feeling over the last month or so was coming out of me but also I was happy! Happy that I had a new challenge in life and something that I had to make work...... This was it! This is what I was waiting for!

The following weekend, I ran my very first party. I had also been quite privileged to be able to attend a party and a session before my training (thank you, Rachel!). The party went well, I really enjoyed it and even got my first tip!

It then took me a while to find suitable venues. I went around advertising my sessions and gaining interest. After my first week of putting the word out and having had no interest. I felt that this wasn't going anywhere. I got home from our weekly shop on the Friday night and switched on my lap top and...Bang! 3 emails of interest! The next day, there was another 2. A week later, with a bit more advertising and putting the word about, I had 5 names down at each venue! I was now happy with what I had. My wife wanted to go France for the Easter break and I felt a bit more relaxed knowing I had names down, so I said 'let's go'!

"At this moment, I am buzzing! This is something I can build upon, work around my family commitments and most importantly, have fun doing!"

Before I ran my first session I w 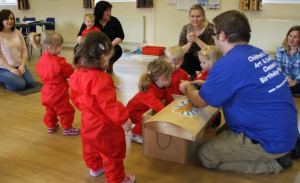 as really nervous. Will the mums take to a man running the session? It all seemed to go well and I learnt how to improve sessions each time. I am really pleased with what I have achieved so far. A total of 20 children's imaginations inspired with more people attending each week...

Have I made the right choice? It’s early days but I believe I have. At this moment, I am buzzing and I feel a lot more relaxed in my new venture. This is something I can build upon, work around my family commitments and most importantly, have fun doing.........Thank you Creation Station :-)

We also offer the Create Club franchise which is a more managerial business great for Dad's across the UK.

I had a really great time with Claire…

I had a really great time with Claire in tonight’s session on creating a mindfulness scrap book. I have never tried scrapbooking before and may have found a new hobby now!

A really fun evening making a journal which turned out much better than expected! - relaxing and the time passed so quickly. Claire is also a lovely host.

Fabulous. My two year old absolutely loves the sessions and Joanna has done a great job with the zoom classes during lockdown

Multi-Award winning franchisor, Sarah Cressall provides free workshop on how to be your own boss.

Welcome to the House of Creative Fun