As it’s St Patrick’s Day today why not get your little one to join in the celebrations and download this fun colouring sheet.

Help them to add all the colours to the rainbow and discover their pot of gold at the end. 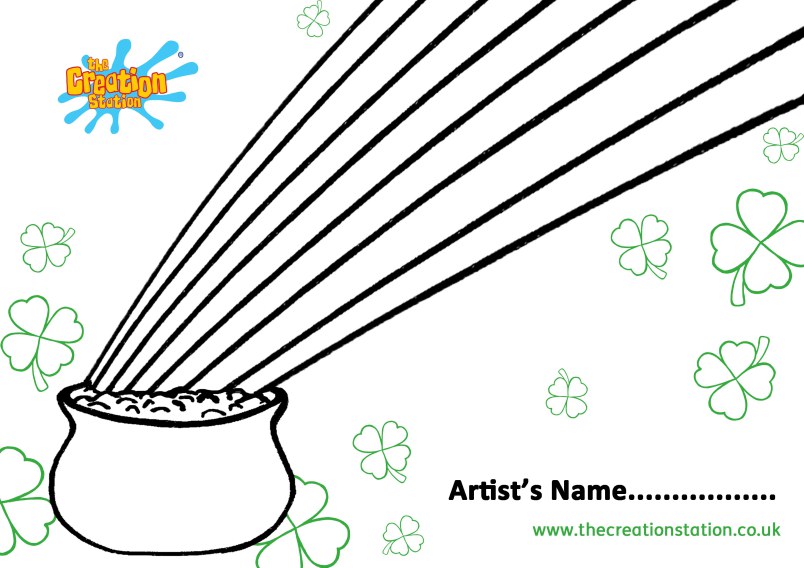 St. Patrick was not Irish

He was, in fact, from Wales.

The shamrock was originally a teaching tool

St. Patrick is said to have used the  three-leaved plant to explain the Holy Trinity (Father, Son, and Holy Spirit) to the pagan Irish. This may not be true but an interesting story instead.

Blue was the colour worn on St. Patrick's Day

For many years, blue was the colour most often associated with St. Patrick. Green was considered unlucky. St. Patrick's blue was considered symbolic of Ireland for many centuries and the Irish Presidential Standard is still blue.

For many years, Dripsey in County Cork had the world's shortest parade, just 77 feet, the distance between two pubs – The Weigh Inn and The Lee Valley. Currently, the town of Hot Springs, Arkansas, claims to have the shortest parade – a 98-foot route on Bridge Street. Recent participants included the Irish Elvises and the San Diego Chicken.

Over 200 years in Sydney

In 2010, the Sydney Opera House went green to mark the 200th anniversary of St. Patrick's Day there. In Sydney, St Patrick's Day was first marked in 1810, when Lachlan Macquarie, the Governor of New South Wales, provided entertainment for Irish convict workers.

In  Chicago every year, the Plumbers Local 110 union dyes the river "Kelly" green. The dye lasts for about five hours.

Shamrocks at the White House

Traditionally, every year, the Irish leader hands a crystal bowl full of shamrock to the US President. The shamrock, grown in Kerry, is immediately destroyed by the Secret Service after the exchange.

We would love to see your creations so please upload them with #creationstation to ourFacebook or Twitter for your chance to win the March goodies.

My child had a great time at the space…

My child had a great time at the space themed creation station with Alexis at Betley School! Thank you so much! :)

Thank you for inclusive, fun and engaging intergenerational workshops Alix!

Thank you to Alix for the fantastic intergenerational workshops she ran for us at Sussex Housing & Care last week. Residents at Saxonwood care home in Battle and Oakwood Court care home, Haywards Heath connected with relatives, staff, families and children. The experience was very enlightening and emotional. The activity was designed to be inclusive, fun and encourage interaction, building on the positive resources that young and older people have to offer each other and those around them. But little did we know how captivating this latest venture would turn out to be! We have had amazing feedback from all involved. A relative said “Thanks for a lovely event, it was great to chat and to see everyone”. Evelyn and Peggy, residents at Oakwood Court, joined up with Evelyn’s grand daughters Hannah aged 2 and Isabelle, 13 who tuned into the workshop from home on zoom. Evelyn even said during the session “We need this!”. Lots of fun and belly laughter was enjoyed by all as we created our portraits and connected with relatives. Care assistant Charley added, “it was lovely to be part of and we look forward to running more intergenerational workshops in the future”. Thank you for all the fun and enthusiasm and your hard work in pulling it all together Alix; the collages and experience was amazing! Fingers crossed for the world record!

The course was absolutely brilliant and efficiently run. My daughter really loved the amount of different mediums she was able to create with and the fact the some of her creations are able to continue growing at home!! Looking forward to the summer course!

We had a lovely afternoon making slime…

We had a lovely afternoon making slime and experimenting what we could do with it. Kelly was a fabulous host and we received a warm welcome. Would definitely recommend The Creation Station classes to others.

We loved our session last week doing hand and footprints. it is perfect for arty/creative mums wanting to get their baby into crafts as early as possible! cant wait to come back!

This was a great session led by Alix via Zoom. Started with silk clay making keyrings and more and then finished with slime. Excitement started with box of goodies arriving in the post before the event. Everything was provided so really easy. On the day loads of interaction with every child on the Zoom call. We will definitely do it again with Alix. Thank you so much!

A fantastic few days for my daughter

A fantastic few days for my daughter. She loves Emma and everything they did - came home full of beans!

Fantastic class for babies and…

Fantastic class for babies and toddlers! Great for development and lovely class leader!

Well organised ascusual and Eva was…

Well organised ascusual and Eva was really happy to tell me what a fantastic day it was. Really lovely to hear that she was able to do something with new friends.