Cbeebies My First Painting filmed with The Creation Station

The Creation Station team were delighted to be approached to work with MCC Media to help with their TV Show My First which is broadcast on CBeebies. Join us by tuning  in on Wednesday the 28th of March 2018 at 5:35 pm #myfirstCBeebies

Our Creation Station franchise owner Sarah Jenkinson in North Bury – Greater Manchester shares her behind the scenes story of what it was like to have the film crew to come along and film for CBeebies in your class.

“I had the privilege of working with a media team to record an episode of ‘My First Painting’. I must admit something like this had never happened to me before, only 2 months earlier I was still working as a primary school teacher! Nevertheless, I was prepared to take on the challenge and hopefully do The Creation Station proud.

I discovered this episode would be named ‘My First Paint Class’, and would involve a little boy coming along to take part in a Little Explorers session…so in effect his first painting class. 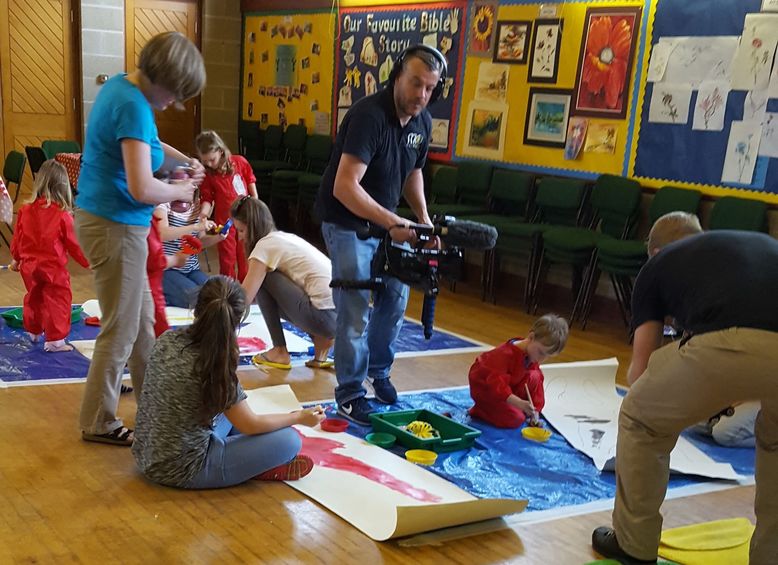 Prior to the recorded session, I met with some of the media team at the venue (one I use for classes) to discuss the running of the session and what it would involve.  It was at that point reality set in as I hadn’t much time to sort the activities and it was just in a few weeks time.

The theme of the session was to include an element of nature as the little boy would be visiting a park and gallery prior to coming to the session. Creative Hub team was on hand and we developed our ideas and chose to do a Big Art session which is hugely popular across the whole UK so we knew it would be a big hit.

I was fortunate to have lots of Little Explorers from classes, friends and neighbours to join in the class. Of course, children and parents were excited and more than willing to be part of the afternoon’s filming. Joscelin Hennigan our Bolton Creation Station owner also came along and was a massive support to me.

Although I was initially really nervous beforehand,  the actual afternoon of filming was really great fun.  We all got involved and enjoyed the craziness of it all. The little boy arrived and really got stuck in. The session ran with our trademark Magic Ideas Box to help unlock each child’s own ideas and nurture their own creativity and imagination.

The children discovered creatures from nature including ladybirds, bumble bees etc…not real ones!

We talked about the creatures and which animal they would like to be, which got imaginations buzzing! We had fun on a brightly coloured parachute and underneath we had the lengths of lining paper for the Big Art session. 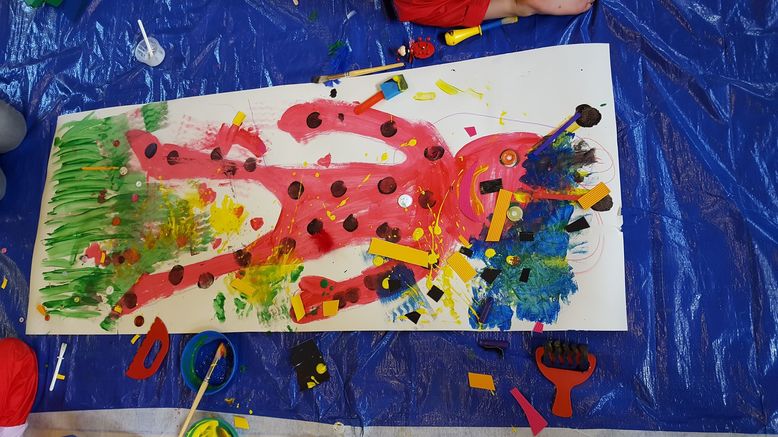 The children were amazing, sitting waiting for different shots to be done but clearly wanting to get started with the activity. It was scary for everyone having two cameras recording you and being hooked up to a microphone…but hopefully, we dealt with it ok!

After a short while, the children got going with the session. The session soon flowed more freely and it felt more natural and like our usual Creation Station experience. The children loved being drawn around and the paint and collage were freely applied to their outline shapes.  With the support of their parents, the children transformed their Big Art selfie into a creature! Fantastic trees, ladybirds and butterflies being popular creations.

The little boy being filmed was understandably the focus but all the children had an opportunity to discuss their creation whilst being filmed. 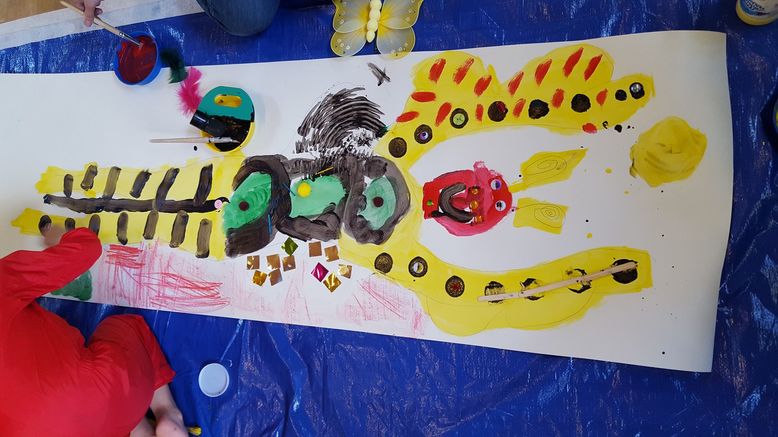 Our sessions are usually between 50 minute and an hour, but as this was a bit more involved it took about an hour and a half. Plus we had a break for refreshments. At the end, we sang our creative kid's song and the crew and the little boy headed off for the next part of the filming.

The children and parents who took part were still buzzing, proud of their Big Art Creations! Each child was given a little thank you gift from Creation Station for being so awesome!

Parents gave a voluntary contribution towards the session which I donated to the fund set up for the victims and families of the Manchester Bombing which had only happened a week prior.

The afternoon is one I will never forget. I’m nervous and excited to see the programme live on CBeebies, but hopefully, I’ll enjoy it!. Thank you to Creative Hub for your help and support and to MCC Media and CBeebies for a wonderful opportunity”

Our huge thanks go to both Sarah Jenkinson and Joscelin Hennigan who were brilliant at organising, setting up and running this workshop. Thank you, ladies! We are super proud of you and fortunate to have you in our Creation Station family. Our thanks also go to the Creative Kids and MCC Media.

For details of local fun creative classes, parties and events for children and adults, in your area, pop your postcode in here.

If you don't have a Creation Station in your area, and you or someone you know may be interested in running your own flexible, fun and creative franchise - click here for more information.

My daughter and I had an absolute ball…

My daughter and I had an absolute ball at the creation station today! Playing with lots of different mediums and making lots of beautiful artwork! It was jam packed full of activities that were accessible to children of all ages! My 19month loved getting stuck in!!

Brilliant class, Lisa was so helpful and patient getting my baby boy to do his handprint when he wasn’t co-operating. Made some gorgeous little keepsakes we will treasure forever. I also felt very safe attending this class, very well distanced between other mums, clean materials and work spaces and well thought out. Thanks Lisa.

My son had an amazing time

My son had an amazing time. It was his first camp experience and he requested to go again. He enjoyed the different themes.

My children had a really great time at…

My children had a really great time at the slime workshop. Everything felt really safe and it was really well set up! We all had a great time making slime together!

Love the staff they are very friendly…

Love the staff they are very friendly and funny and the play do is amazing.

Staff were amazing with kids

Staff were amazing with kids, such a great craft station! Highly recommended!!

The session was as expected (great) and Avne was absolutely amazing with my son! The slime making session was fantastic and my son loved it! We will be attending more workshops at the Creation Station. Thank you

A lovely and relaxed class with my…

A lovely and relaxed class with my daughter and the hot drink and slice of cake was a nice little touch! There were lots of materials available to use and Alexis was always happy to help out.

Good fun for the kids and very friendly…

Good fun for the kids and very friendly staff . A definite recommendation!

How to marble eggs #MakeItMonday

How to paint dot an Easter egg #MakeItMonday