17 women leave their jobs to run a flexible Creation Station franchise to have more time to raise their children.

In the past 12 months, 17 women from a variety of careers including Law, Human Resources and Teaching have chosen to run their own Creation Station, the leading children’s arts and crafts franchise. Their reasons given include the need  gain greater flexibility around family commitments and to have more time raising their children. This increasing trend is backed up by a report by the British Franchise Association, who state almost 30% of all franchises are now owned by women.

Diane Wilkinson from Northumberland, left teaching as she found the job meant she was having very little time with her own family “I love supporting children but I was doing 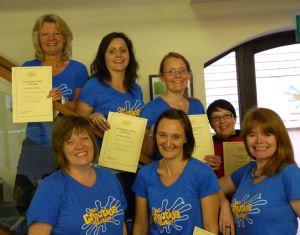 more and more paperwork and was missing time with my own daughter” says Diane. “It was a big step to give up a reliable salary and holiday pay but I just felt that if I didn’t take the steps to achieve what I wanted for my family then I would be stuck in the same place and that isn’t what I wanted. The work I do now makes a real difference to children and their families and I also have the benefit of more time with my own daughter.”

After 16 years of being a solicitor Jenny Seymour from Sheffield decided it was time to make a change when she had to miss her children’s Christmas concerts and plays. “I didn’t want to miss out any more on my boys growing up and I realised the only person who could do something about it was me” says Jenny. “I went along to a Discovery event with my children aged 3 and 4 and I was a totally amazed at how much they enjoyed the arts and crafts. I realised what a fantastic business opportunity The Creation Station provided, it was truly inspiring. It was a huge step to give up the security of my career but for me, it is has taken me to a place where I now have the flexibility to be my own boss and to be there when my boys need me and when I want to be there too!”

Many other mums who where working in banking, child-care, the police force and local government have also chosen the benefits of running a flexible, tried and tested children’s activity franchise over having a fixed, permanent job.

Laura Meachin from Bristol was one of five ladies who had just completed their training in May for The Creation Station franchise said “I gave up working in a nursery as I was looking after other people’s children and paying someone to look after mine. It just didn’t feel right. I knew I had to change something, I went to one of The Creation Station Discovery Event and I could see the potential and just know I had found what I needed”

The Creation Station franchise was established by mum to three, Sarah Cressall in response to a gap in the market and in order to gain flexible working around her family commitments. Now, over 60 women run their own Creation Station franchise providing children’s art and crafts classes, children’s party entertainment and event entertainment across the UK. Sarah Cressall’s commitment to supporting women running their own flexible franchise has gained her the title of The Best Female Franchisor Award and The Best Franchisee Marketing Support award.

My girls absolutely loved coming along…

My girls absolutely loved coming along to wizard school and are so proud of all of the things they made! We will definitely come again and would highly recommend.

Great session for my 8 and 5 year olds who loved it. Tracey is friendly and welcoming and the children were fully engaged throughout. Would recommend and attend again.

Really good ..my daughter enjoyed the…

We had a party for our 8 year old “art mad” daughter today. We had been to one of Nakita’s parties before, so we knew it would be fantastic, but as a guest you don’t get to see all the behind the scenes stuff! Nakita listened to what we had requested & really worked hard to cater the party towards Immy’s interests ... Sloths, Slime & Unicorns! The birthday canvas is so beautiful, we really will treasure it! The party was so well organised & the children were kept busy. There was no time wasted between activities. It all ran so smoothly. The children really enjoyed each activity. It was lovely that they could take their canvas home & the slime was definitely a BIG hit. The squeals of joy were wonderful to hear! Nakita worked really quickly and efficiently and I couldn’t believe it when she had packed everything away within less than half an hour. Our house remained spotless! Well done to Nakita, you made one special 8 year old & the rest of her family and friends very happy! Katherine, Mike, Immy & Elsa Evered.

My boys age 6 and 4 had the best morning and found it lots of fun. We are looking toward to booking the next one.

My son was very happy and he learned a…

My son was very happy and he learned a lot of interesting things during these clubs. He Wants to return again

Slime making was well organised and D had a great time. Big pot of slime!

The Creation Station is fabulous

The Creation Station is fabulous. Both my boys aged 15 months and 9 years old absolutely loved it. We will 100% be attending more upcoming classes ?

My son had a great time and is so…

My son had a great time and is so pleased with his work. Much easier than attempting making these at home and no mess to clear up.